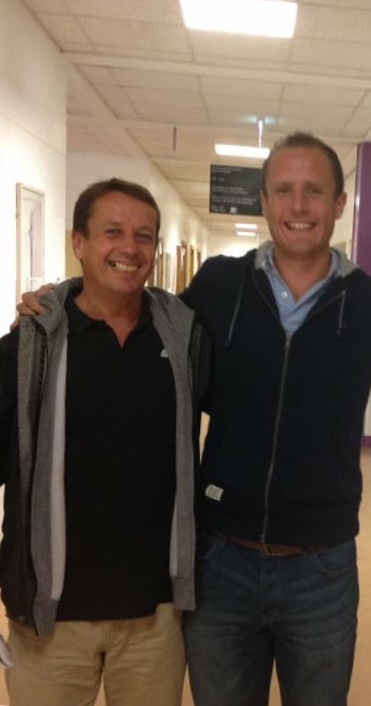 Somehow, a guy who has coached athletes to the last 3 Olympics, whom I have met once, writes my run training now.

How does that happen? It’s a long story, but to summarise: he took an interest and I trusted him.

I met Andy when we had both been invited on behalf of the Athletics Association of Ireland to present to coaches. I was talking about how to avoid running injury and he was, of course, talking about coaching. A shared rental car and an airport pint of Guinness later and we soon hit it off, as people with shared values often do.

At the time, a little over 12-months ago, I was in the midst of a comeback and would run a PB over 10km 4-weeks later. I had begun to master the art of consistency and I spoke to Andy about my modest goals. I felt they were attainable, if I maintained patience with my approach. Andy being Andy, started throwing out all-sorts of times he thought I could run, but I knew it was not the right time to listen. I hadn’t run consistently for 10-years and I needed to prove to myself that it could be done before I would hear anyone else’s ideas. I didn’t trust running and I certainly didn’t trust coaches with my injury prone body. I had learned enough the hard way to go it alone for now.

Fast-forward 10-months, I’m in Sydney after another 10-km PB, the PB that accomplished all the goals I had mentioned to Andy previously. I’m limping through Sydney airport on my way back to Auckland when a message from Andy comes in:

‘Question is can you break 16-minutes for 5-km?…..it’s been a lot of fun following your progress’

My response was non-committal:

Andy was sowing seeds, as only he can. And so it’s September, I’ve got commitment fatigue and a pain in my achilles that is not compromising function but is compromising enjoyment. Simultaneously, I’m wrestling with the fact that I’ve never been fitter for the time of year and maybe I haven’t been the best I can be? (knowledge I’m unable to live with in any domain of my life).

I continue to train and rehab to bring the pain under control but I realise that if I’m to go further in my running, I’m going to need some help. I’ve taken myself as far as I can. I decide, Andy will be the first guy I ask to coach me in over 10-years.

Andy knew I had formulated a routine that enabled consistency and would want to protect it. He’s experienced and lacking in arrogance, so he works with what you give him.

‘Andy for the next two months I can only run 3-days a week and supplement with everything else’,

Like all high-performers, Andy prides himself on consistency. I receive the weeks training every Sunday without fail. I communicate the outcome of each training session via text and always receive a response. Other than that, he let’s you get on with it and make the day to day calls – just right for the mature athlete.

Being the Best You Can Be

I may have controlled the number of days I could run without breaking, but Andy controlled what went in them. It seemed as though every Sunday, Andy was setting me an impossible task for the week ahead. The reps, the pace, the volume of quality – every week, I would question whether I would be able to deliver it. More often than not, with the exception of the odd tired week, I was delivering a level of performance in training I didn’t think I could.

Andy doesn’t break you, but he goes close, he bends you. The week before race week, you’re all out, mentally as much as anything else – there is nothing left to give. Finally, mercifully, he gives you a little room to breathe during race week. As the week goes on and you slowly start to feel better, you realise how fit you are. You also reflect on how your training splits have often been delivered under heavy training fatigue – the best is yet to come. Not feeling good, until it counts, is something I’m still getting used to, but I’m confident I can.

Being the Insecure Athlete Again

The part I’ve enjoyed most is just being the athlete again and having a mentor. I’m not the coach, sports scientist, physical therapist, running blogger – just the insecure runner, – desperately hoping to improve and constantly questioning their ability. With Andy, I don’t think, I just do. I can rant and rave about the good sessions and the bad as if I understand nothing about running, a luxury I’ve not had for a while –  thanks coach.